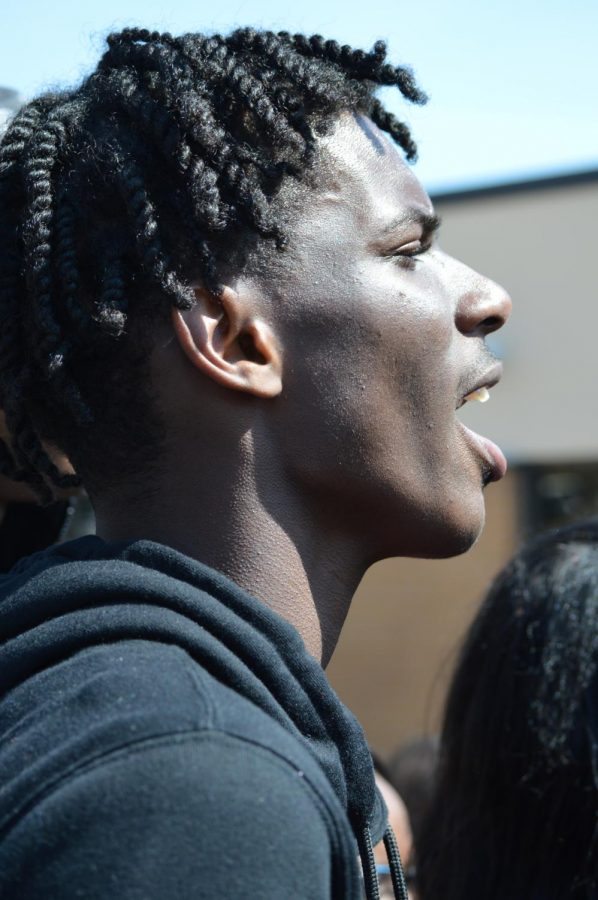 Senior Caleb Tillis speaks out at the walkout on March 27.

On March 27, over a hundred students walked out of class following a video released over spring break on social media that recorded three Parkway Central students making racist remarks, which led to the student lead walkout.
Even though the incident happened off school property, it was posted on social media and the video has spread like wildfire, being reposted by kids who are hurt and disgusted by the videos.
The morning back from break, Principal Tim McCarthy made an announcement to the school on the PA. He explains that the video was viewed by a significant number of students causing Central students and members of the community to “justifiably feel offended, outraged, hurt, and for some, targeted,” McCarthy said.
The walkout first started in the location of the administrative building because many students felt that what they knew about the punishment for the students in the video using racist language was not severe enough. Adults that attended the walkout included McCarthy, Superintendent Keith Marty, multiple police officers, and even parents who wanted to have their say in their children’s safety.
Sophomore Deja Campbell was one of the main participants at the walkout, and explained her feelings of being unsafe in her environment.
“There’s no excuse for no matter if they were drinking or if they were under any type of influence that they should know that this is bad and not that they should get a slap on the wrist and that shit could come back to the school,” Campbell said.
Campbell also believes the school should not ignore what has happened.
“We need at least some information on what needs to be done or else I’m gonna feel unsafe in my environment,” Campbell said.
Dan Kelty, Spanish teacher, is frustrated that racism continues to exist in our diverse community.
“Maybe something new has to be done to address this situation because we can no longer rely on old laws to address this new phenomenon. We have to have a new set of boundaries now and I think this is a perfect example of that,” Kelty said.
McCarthy experienced many challenges in this situation, including balancing district policies with student needs.
“When I saw the video, my heart sank. I’m working within a framework of rules and expectations over which I don’t have control but I’m working with students who are again understandably feeling a certain way and there are challenges to helping the students feel better with that framework of rules and so that’s just frustrating for me,” McCarthy said.
Sophomore Adrienne Reed was an vocal advocate at the school walkout and in meetings with representatives from the Parkway School board. Her focus is to make equality a priority in the schools.
“I feel like one of the ways we can change that is, start by like repping up more and Black Lives Matter and doing other things. It has to be the whole year and it’s not just February were we should represent people of color, it should be all year that we represent people of color because there are people of color whose making change today, ” Reed said.