Rethinking how the school year should be scheduled 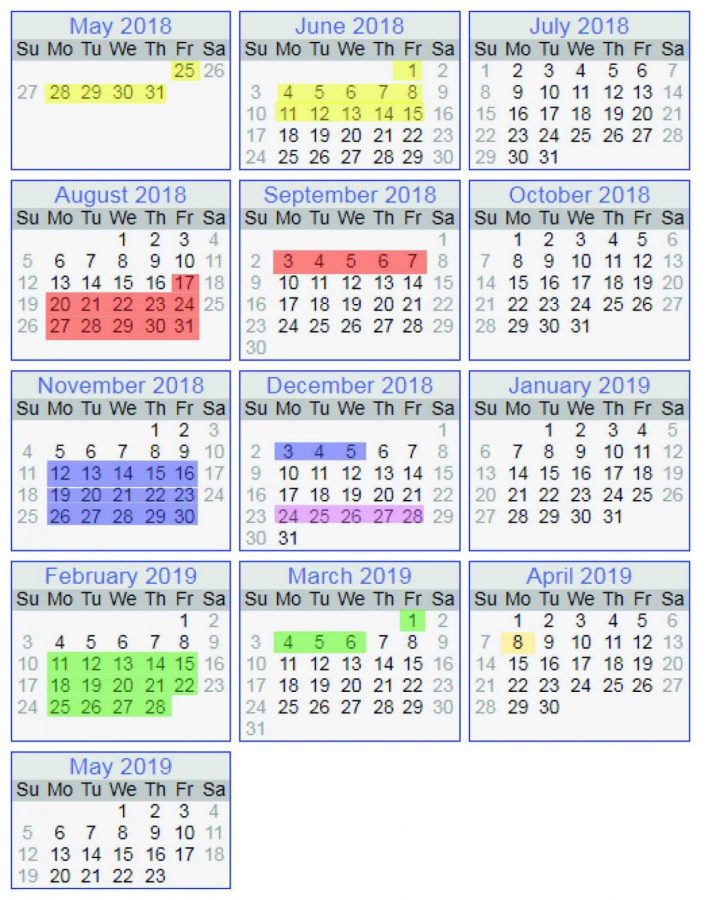 This is an example of a schedule that would potentially replace the summer vacation schedule. Instead of having a sinlge long break, this schedule spreads out all the breaks into four main sections for each season. The shaded regions are breaks and the unshaded regions are school days. Accompanying these breaks would be an additional 11 days for scattered additional breaks not listed on the calendar.

There are 82 days of summer vacation, then school comes along just to end it. The annual problem for the administration is finding a good way to spend it, as well as the rest of the break days distributed throughout the year. Among students, it is common to look forward to and enjoy summer vacation. However, as much joy as summer brings, summer vacation has seen a vocal minority of critics. Is summer vacation actually a good idea?

The biggest and most important critique of summer vacation is how it affects students after they come back. As a result of staying away from school for an entire summer, students lose an average of one month of schooling, according to a study by the Brookings Institution. This means that teachers have to waste a month on getting students back up to speed rather than progressing at full speed with new material.

The effects are especially staggering for students who struggle in school, as well as for people with low incomes. According to a review of 39 studies titled “The Effects of Summer Vacation on Achievement Test Scores: A Narrative and Meta-Analytic Review,” students who take longer to learn information will need to spend even more time getting used to the productivity of school, and students with low incomes do not have as many resources for education as students of higher incomes, creating a further disadvantage for those of a lower socioeconomic status.

While studies in general have shown summer to be detrimental, the exact detriment has been varied. When it comes to retaining concepts, like problem solving skills, those generally stay roughly the same. Practice based tasks, like math and vocabulary, suffer by far the most. Some schools are affected more than others, but the effect is widespread.

Basically, summer vacation is bad for education. What should we do about it?

There are many possible alternatives to a summer vacation that may not only benefit education. In the 2018-2019 school year, we had 3 days of Thanksgiving break, 9 days of winter break, 5 days of spring break, and 9 days of miscellaneous days off (MLK Jr. Day, President’s Day, etc.), not including days off from weekends. We had 58 days of summer vacation (also not including weekends). Now, imagine the ability to insert those 58 days throughout the rest of the school year. The possibilities are exciting. 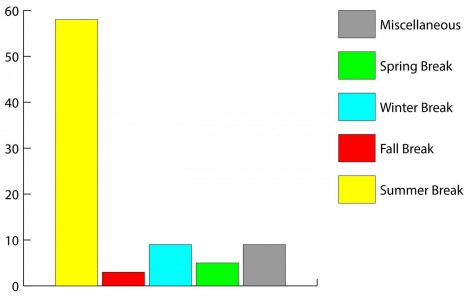 In the current school year, there are far more days off during summer break than all other breaks combined. While this provides a nice vacation, it has become questionable whether or not this large break is actually worth it.

One possible method would be to give equally long spring, summer, fall, and winter breaks. This would look like about 9 weeks of school followed by about 3 school weeks worth of break. To put that into perspective, that is about the amount of weeks before the beginning of second semester and spring break, the major difference being that “spring break” would be over three times as long. Furthermore, there would be even more days left over for things like four day weekends.

A schedule like this would be beneficial for many reasons. Students would never be out of school for as long as the 11 week summer vacations we have now, limiting the amount of learning lost. Furthermore, a break of three weeks is substantial, allowing for both teachers and students to take a long, necessary break.

This isn’t the only way of changing the schedule. You could instead split summer break and winter break equally, or even make every week a four day week instead of five day week. The point is to limit the length of summer, which could look like however you would want it.

To those of you that want to latch on to a long summer vacation consider this: taking off just 10 days of summer vacation would double the amount of 4 day weekdays in a year. Surely this would be worth just two weeks of summer.

Unfortunately, the issue is not as simple as I am making it out to be. Instituting this change would be extremely time consuming and challenging logistically, particularly regarding class scheduling. Students create and submit their schedules to counselors in January. The process of determining classes, solving scheduling problems and most importantly hiring teachers takes place during the summer break. Reducing this break would cause for counselors to do this work during the school year on top of their existing responsibilities.

Furthermore, summer vacation also provides the opportunity for many students to work. Summer jobs would be eliminated as a result of this change, causing for more students to work instead during the school year. This would be counterproductive to the goal of improving education, as the increased amount of working students would have its own negative consequence, though it is unknown how severe it would be.

Finally, there is not an urgent need to change things from the way they are already. This would be radical reform to the school system, and if people do not see summer vacation as a massive issue, no change will be done.

As someone who thinks that an alternative school schedule would solve a lot of issues, it is disappointing that this issue is not brought up more often. While some may believe the massive dump of break days between school years makes the long school year worth it, I believe that this schedule would help the school with learning, burn-out, and general mental health. Instead of accepting the calendar of the school year merely because it is how we have always done it, think about how nice it would be to not have to go through the vast majority of the school year without a significant break. Surely four triple spring breaks would make it worth it.