Look Out for the ‘The Lighthouse’ 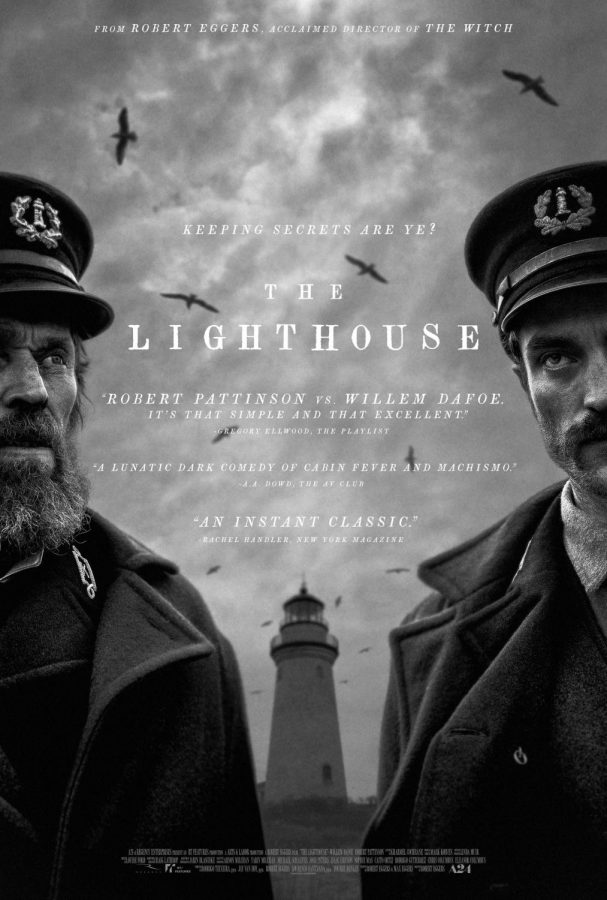 Second poster for 'The Lighthouse', directed by Roger Eggers, coming out October 18. Starring Robert Pattinson and Willem Dafoe, 'The Lighthouse' is the movie to look out for this fall.

This year has seen a fair share of high budget blockbusters. “The Lion King”, “Spiderman: Far From Home”, “Toy Story 4”, “John Wick 3”, and who could forget “Avengers: Endgame” are just a few examples from this packed year.

As the year crawls on, Oscar season gets closer and closer. There will be quite a few movies hoping to make waves critically at the end of this year, but none of them look as interesting and unique to me as “The Lighthouse”.

Starring Willem Dafoe and Robert Pattinson, “The Lighthouse” is one of many’s most anticipated movies of the year. This is a movie about two 1890 lighthouse keepers stuck on a spooky, lonely island in the middle of the sea.

Interesting about this movie is how the two stars are the only two actors in it. This is a movie all about these two characters, in this mysterious place, with potentially supernatural circumstances happening to them. In this movie, they’re trapped only with themselves and their boredom. This may suggest that this is a movie that makes you question what is and is not real.

This movie has gone through the film festival circuit, and so far critics are praising it. Currently it has a 94% on rotten tomatoes and a 89% on metacritic. The Telegraph said it’s “cinema to make your head and soul ring”. The hype for this movie is real.

Surprising to me originally was the inclusion of Robert Pattinson, former sparkly vampire. Though I have not seen him in any other parts, I have read from critics that Pattinson is actually an extremely impressive actor. Do not be turned off to this movie because of his former acting credits. Give him a chance. If you don’t do it now, you will have to when he plays Batman.

Something that gets me excited for this movie is the director. Roger Eggers is one of the most promising young directors making movies right now. His 2015 horror movie “The Witch”, about a New England family in the early 1600s experiencing strange circumstances following the disappearance of their child in the woods.

I loved the aesthetic of this movie. The mood was super dark, dingy, and creepy. It felt like reading an old book you aren’t supposed to be reading. The look of the movie was unlike anything I had ever seen. This film was shot beautifully, nearly every shot felt like it also could be an illustration in that old book.

Looking at the trailer of this movie, it is making me think Eggers is the master of creating this aesthetic. Every shot of the trailer could look like an old charcoal drawing on an old sailor’s sketchbook. This movie is in black and white, which adds to the aesthetic even further.

This is one of the coolest trailers I have ever seen. Check it out, even if I haven’t yet done it justice. I highly recommend looking out for this movie when it comes out this fall. You might be in for a treat.