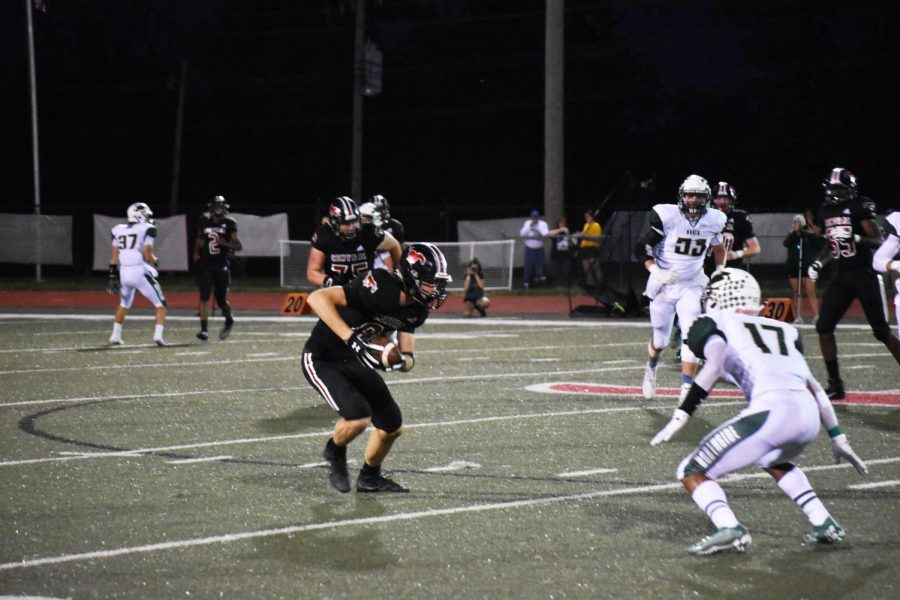 Cam Roberts runs with the ball after making a reception in a game against Fort Zumwalt North on 9.13. “I consider wide receiver my primary position even though there’s only one punter on the field at a time, but there’s always multiple wide receivers on the field,” Roberts said. Photo by Christine Stricker.

As one of the bright spots on the football team this season, senior Cam Roberts his proving his worth at a position that is considered the most invaluable position on a football team: punter.

“I think my punting helps the most with the defense because good punts can’t flip the field position so the other team will have to move the ball farther to score,” Roberts said.
“If there’s a bad punt, the defense has to stop the opposing offense quicker to keep points off the board which is always tough if the opposing team has good field position.”

Roberts is sixth in state with a punting yards average of 40.73 yards, and he has punted the ball 45 times, good for a total of 1833 yards. He is also one of the team’s top wide receivers with 18 receptions for 216 yards with one touchdown.

“I consider wide receiver my primary position even though there’s only one punter on the field at a time, but there’s always multiple wide receivers on the field,” Roberts said.
“Offense is just a more fun part of the game and I’ve been playing on offense longer than I’ve been a punter.”

During the season, the team works on punting once a week and Roberts considers that something that has helped him a lot.

“Working out and punting after practice on Tuesdays has helped me a lot because the repetitions help me know how much time I have to get off a punt and helps me know my abilities,” Roberts said.
“This practice also allows me to get used to different snaps and how to quickly punt the ball even if there’s a bad snap so the punt doesn’t get blocked.”

Along with the practice he does during the season, he attributes some of his success to work he put in during the summer at home.

“During the summer, I got a lot of work in at home with my brother,” Roberts said.
“Practicing at home and punting over and over and over again helped me improve my form and added on muscle memory which helped make punting just an every day thing that I don’t have to

stress or worry about as much anymore.”

With a team that has punted as much as the football team has, it is very valuable to have someone that can at least help switch up field positions so the defense has a little more leeway. Roberts is adding key value to his team at one of the most inglorious positions in the game of football.