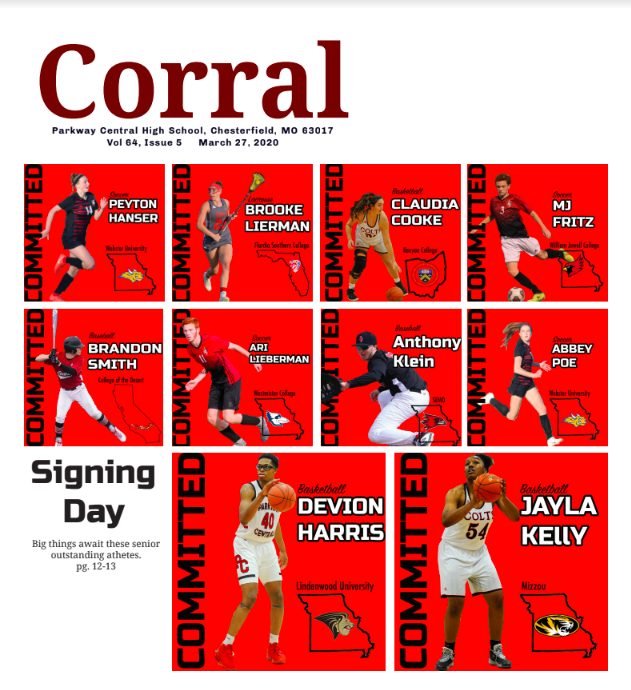 His favorite memory from high school baseball was last year when the team beat the Vianney Griffins who were ranked fifth in the nation and ended up winning state last season. Klein plans to study either Exercise Science or Accounting at SEMO. His parents were very supportive of him throughout the process.

“My parents just tell me to follow my dreams and they will support me in whatever I do,” Klein said.

Brandon Smith has signed to play at College of the Desert (COD) in Palm Desert, California for baseball.

“My goal was to play in California and I worked hard and got better and COD gave me an opportunity and it was one I couldn’t pass up,” Smith said.

After visiting other schools close to home and some other junior colleges in California, Smith decided College of the Desert would be the best fit for him. Smith started playing baseball at 5 years old when he moved to St. Louis. His older brother lived in L.A., which had an influence on his decision to play in California.

When his two years at COD are over,  Smith plans to transfer to a bigger school in the Southern California area, whether it be for baseball or just for school. Smith plans on studying Kinesiology in college. Last season for the Colts, Smith had an on base percentage of .361.

Claudia Cooke, who has been playing basketball for ten years, signed with Kenyon college to play basketball. She chose Kenyon because she knew it was doing to challenge her with not only basketball, but also academically.

Cooke’s favorite memory was going to state her junior year. She is currently unsure what she wants to major in, but Kenyon college has a wide variety that she can pick from which played a part in her decision to pick this school. Cooke is receiving several academic scholarships that will cover the entire cost, which made the decision easier for her.

“My parents didn’t put their input in, they wanted it to be my decision only and they would support me and be happy with any school that I chose,” Cooke said.

Brooke Lierman, the first lacrosse player in the program to sign to play in college, committed to Florida Southern. After visiting Florida Southern, Lierman cancelled all of her other visits and calls with other schools because she immediately fell in love with it.

“I just had a very strong feeling of home when I was there,” Lierman said.

Lierman has been playing lacrosse since spring of 8th grade. Her favorite memory of playing lacrosse in high school was traveling the country with her select team and winning many championships.

Lierman plans on majoring in international business and getting a minor in economics, while on a scholarship at FSC..

“FSC has a super super good business program. This helped my decision a lot to go there,” Lierman said.

Ari Lieberman committed to Westminster College for soccer. He has been playing soccer since he was 3 years old and has not stopped since. He chose this college because it checked off the majority of the boxes for him academically and athletically.

”On the academic side, I knew I would get a great education that would challenge me, hold me accountable, and prepare me for a future in a Business Administration. Athletically, Westminster has a very strong program with an excellent coach and very supportive teammates,” Lieberman said.

Lieberman instantly felt like a part of the team and had a feeling that it would be a good fit for him. Lieberman’s favorite memory from all four years of high school soccer was scoring his first varsity goal in his first varsity game during his junior year season. His parents did not have much input in his decision because they wanted him to make the best decision for himself.

“Of course they gave me advice along the way, but they really encouraged me to decide on my own,” Lieberman said.

He will be majoring in business administration, which is the biggest major on Westminster’s campus. Lieberman believes that the opportunities that Westminster offers in this field will help him find a good job post-education.

Abbey Poe, varsity girls soccer captain, committed to Webster University to play soccer. She chose Webster because it is the perfect size and she liked the location because it is not too far.

“After meeting the team and the coach I felt I truly belong at this school,” Poe said.

Poe has been playing soccer since she was 4-years-old, so it has always been a part of her life. She has been on varsity all four years and has made many memories with her favorite memory so far being the team scavenger hunt her junior year.

Poe’s dad played college soccer so he helped her throughout the process.

“He shared the negative and positive outlooks and his personal experiences which helped me decide on which division I wanted to play at,” Poe said.

As of now Poe is planning to major in education. She is receiving an academic scholarship.

Peyton Hanser also committed to Webster University for soccer. Webster stood out to her as a good option because it is a Division III school and Hanser wants to focus more on academics, but also be in a competitive soccer school.

“I had other options but I connected with the coach very easily and knew right away I wanted to spend the next four years of my life at Webster,” Hanser said. Her favorite memory from high school soccer was after being out with an injury for six weeks her junior year, coming back for districts and winning their first game.

“That game against MICDS was the first district game our team has won in many years. It was special,” Hanser said.

Hanser will be receiving academic scholarships from Webster University.

Jayla Kelly signed to play college basketball at University of Missouri where she will be receiving a full-ride athletic scholarship.. Kelly chose Mizzou because she felt a family environment within the team and because they are a power 5 program.

“It was really hard. It was between Northwestern and Mizzou. It came down between those and it was only a few things that separated the two but Mizzou ended up being the right choice,” Kelly said.

She started playing basketball in third grade, so basketball has been in her life for a long time. Kelly has accomplished many achievements in her career at Central. In February, Kelly hit 1,000 career points and rebounds. Her favorite memory from playing basketball in high school was her junior year when the team went to state and got third place. Her parents wanted her to make the decision for herself and just wanted her to pick a school she would be comfortable at. Kelly plans on studying sports medicine when she gets to Mizzou.

Chris Stephens signed with Westminster to play soccer. He chose Westminster because it is close to home and offers the degree he wants which is business finance/accounting. Stephens’ favorite memory from playing soccer in high school was the Rolla tournament and when he scored the PK against Howell Central. Stephens will be receiving an academic scholarship.

MJ Fritz committed to play soccer at William Jewell College. Fritz liked the location of it because it’s right by Kansas City, so it’s not too close or too far from home for him. His favorite memory from playing soccer in high school was winning state his sophomore year and scoring the game winning goal in overtime against Parkway West in his senior season.

Fritz plans on studying either business management or secondary education. He will be receiving an athletic scholarship.

“I knew William Jewell had great academics in whatever I wanted to study, so I knew I could go there and get a good degree,” Fritz said.

Devion Harris chose Lindenwood University over other schools because he felt that it was a great fit for him and it seemed like a good school to him. He will be receiving a full ride scholarship to attend Lindenwood as a student athlete. Basketball has always been a part of his life, even way before high school.

“I’ve been playing basketball all my life really,” Harris said.

Harris has played on the boys varsity basketball team at PCH for all four years of his high school career. His favorite memory from those four years were making it to the final four and state his freshman year.

Harris’s parents told him to go to a school for more than just basketball and to think about his education and future as well. That played a role in his decision on choosing Lindenwood. Harris wants to go into broadcasting and they have a program for that.