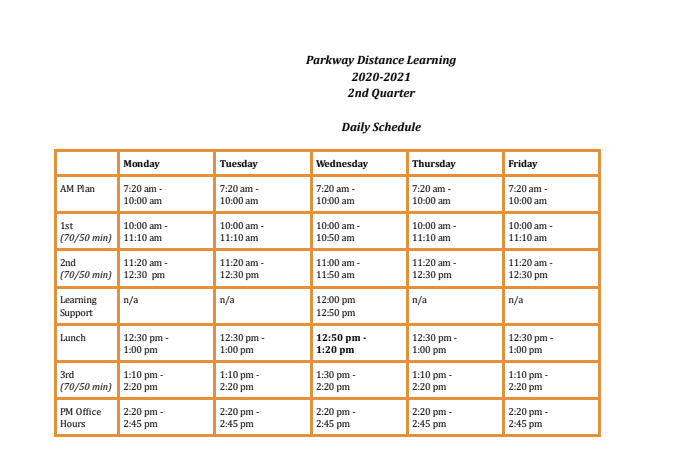 High school schedule for quarter two in the 2020-2021 school year by Tim McCarthy.

On Sept. 29, hundreds of viewers sat down in their homes to watch the live streaming of the long awaited Parkway Board meeting discussing plans for a return to school in person. After much debate and discussion, board members have reached the following mandates:

Due to the low numbers of cases in young children with COVID-19, pre-K will resume full in-person classes. Precautions will be taken in the form of smaller class sizes, increased outdoor play time, and an increased focus on sanitation of objects and hands. These will begin on Oct. 27, with a virtual option as well.

K-5 students will return beginning on Oct. 22 as well, but in a part-time, blended system, as well as grades 6-8, but on Oct. 27. This time will allow new habits to be established throughout the school day, before utilizing a schedule for in person attendance for five days of the week for all students who choose in-person learning with mandatory masks, adjusting to new teachers, daily health screenings, strict quarantine and isolation guidelines, and emphasis on cleanliness.

Unfortunately for high school students hoping to return for the second quarter, the high numbers in cases for older teens have influenced the recommendation for grades 9-12 to remain online. However, some changes will be implemented in the wake of various comments from Parkway.

Due to a high school schedule with three rather than four classes, excluding Academic Lab, 55 minute long classes will become 70 minutes. Academic Lab will continue on Wednesdays, and teachers’ office hours will also remain. Additional support may also be available in the form of in-person support in both the fields of academics and social-emotional health. Counselors, social workers, and psychologists will continue to help students, and interventional support may also be in contact with students who struggle academically.

In the making of these plans, members of the board visited online classrooms. Deborah Hopper, Vice President of the Board of Education, recalls amazement in how elementary students at Barretts were learning how to write, and daily experiences children received at home in the form of breaks in between classes. However, she acknowledges the difficulty the diversity online experiences have brought.

“We all want to do one thing, and that’s the right thing,” Hopper said.

Jeff Todd, Board President, was similarly impressed with what the teachers have been able to achieve at Central and West Middle, after visiting elementary students the week before.

“The first graders I saw last week, they were all very engaged, and lively, and seemed to have a great time in class, but the sixth graders and the eighth graders I can see some of the comments that some of our speakers uttered where some kids were still in bed,” Todd said. “And there were some students that the teacher had to ask a couple times [if they were] able to follow along, [and there was] no response. I see both sides of it. I see the success that some of our students are having … and I see the challenges that our other students are having… We are trying to hear all voices.”

Robin Wallin, Director of Health Services in Parkway, addressed many inquiries from emails and public speakers as to the statistics referenced when decisions are made. While children ages 14 and under have relatively few cases, the 15-19 year age group covers 86% of all cases in children living in Parkway zip codes.

Prior to the start of the discussion between board members, the public comments offered many perspectives, including from many high school parents. Many pointed out the discrepancies in Parkway’s actions in regards to allowing football teams to play outside of the county, including Mary Brownell, parent of an artistically inclined 11-year-old.

“You are teaching them to break rules when you see fit, but only break them for certain people, because not everyone matters… Parkway definitely showed where its priorities lay,” Brownell said. “You are not including all students.”

The concerns of teachers for the health and safety of themselves and their families in the wake of returning back to school were also addressed that evening.

“It is up to Parkway to set the standard for the community… because one life lost is too many,” teacher Carrie Finnestead said.

But parents are worried for the emotional and educational wellbeing of their children.