Taking a Stand, or a Seat

Students are aware of the disconnect between words in the Pledge of Allegiance and daily life. 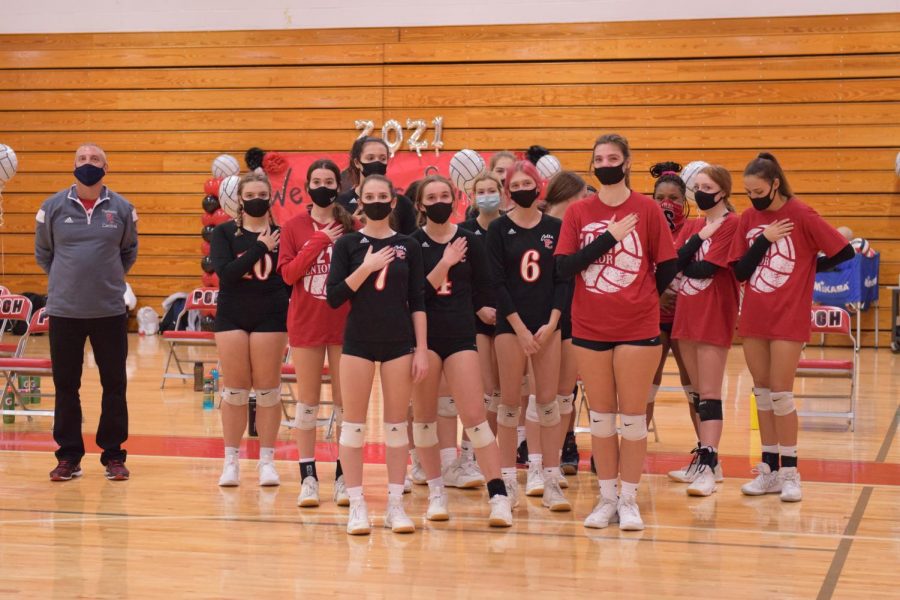 Girls volleyball stand for the pledge before a game on October 21, 2020. "When we do add the pledge to sporting events, people don’t really see the significance of it," Sivabalakannan said. "We're being brainwashed to pledge allegiance to a country when we’re not soldiers in the military or in the navy, because we’ve been taught to do it from such a young age.” Photo by Christine Stricker.

Most people remember the controversy surrounding the NFL in 2016 as players protested police brutality by kneeling during the national anthem. Nearly five years later, the Black Lives Matter movement and other activists’ messages are just as important and many high schoolers are disappointed in the disparities between what the anthem suggests what the country has become.

Francis Scott Key wrote “The Star-Spangled Banner” during the War of 1812. It began as a poem, and was later turned into a song. While it was not the official American national anthem until 1931, it was played at sporting events as far back as 1897. It rose in popularity during WWI as the sense of nationalism increased, but the tradition only became widespread as technology developed to allow events low in funds to play pre-recorded music.

High schoolers, whether they are an athlete or spectator, often find themselves rising before a game to pay respect to the national anthem. It is ingrained in tradition, yet students of various backgrounds are questioning the meaning behind what they support.

“I still don’t think that we are ‘free,’” senior Diego Cruz Bilbraut said. “We have problems with racism… a lot of people don’t accept other people.”

Bilbraut is an American citizen who was born in Puerto Rico. Although the anthem does not fully encompass all groups of people, it still provides a common goal for people to work towards.

“I think the anthem and the Pledge of Allegiance are meant for not forgetting that you are part of a reputation that keeps getting stronger,” Bilbraut said.

The reputation that Bilbraut speaks of is more important than ever. Western culture is under constant scrutiny in global news and politics, and the irony is unmistakable.

“When other countries look at the American flag, they think freedom and peace and everybody’s equal,” junior Shariff Robinson said. “But once you actually get into the United States, you see it’s not that way. Some people don’t have the same [rights] as other people.”

All eyes are on America as we enter a new administration. People have a responsibility to their community to uphold our reputation. While the Department of Defense no longer pays millions of dollars for acts of patriotism at professional sporting events, we have a ways to go before we voluntarily show pride in the country we are part of.

“I don’t really know the significance of the Pledge of Allegiance and the national anthem,” senior Yousuf Ahmad said. “They’re used so often it’s almost like it’s lost its meaning and has become a formality.”

For others, there has never been much meaning to the pledge at all.

“I remember in first grade, we used to all stand up and [say the pledge] in the morning,” Robinson said. “It didn’t really mean nothing at that time… but now if it was required, I wouldn’t do it.”

Immigrants often experience even more confusion over the meaning of the pledge, especially with old habits to compare with. Senior Nandhini Sivabalakannan immigrated to the United States from India in first grade, at the age of six.

“I had just immigrated from India, and I spoke a little bit of English,” Sivabalakannan said. “My teachers told me to stand up and just say the Pledge of Allegiance, and I just remember thinking it was such a weird thing because we didn’t do it back in India. We don’t have a Pledge of Allegiance there, we have a national anthem which we sing every morning, and then there is a song praising the state, but it’s not pledging allegiance to the country. It’s just talking about how wonderful our culture is, and our community.”

Sivabalakannan notes that the U.S. flag is often more visible than the Indian flag, and it is not in a good way.

“You turn the corner anywhere and you see a flag,” Sivabalakannan said. “It’s almost like 1984 by George Orwell, how they say ‘Big Brother’s always watching you.’ It’s almost like that, it’s almost lost its significance. Back in India, you were only allowed to raise a flag during special occasions, and only at federal buildings, so you won’t really see it anywhere else, so there’s significance there. But just to have it at every corner, I think it loses its meaning.”

Few people consider their actions when habits of rising for the flag become so ingrained.

I remember moving to Parkway from a school that did not say the pledge, and was utterly confused when everyone stood up, faced the same direction, and said the same words. I never asked, and eventually figured it out. I am disappointed that no one explained to me the meaning behind what I had to do to “fit in,” but I did it. It did not change my citizenship status.

Saying the pledge does not change the fact that I was born in America, and does not change my political opinions, or lack thereof at the time. I wondered what everyone was doing, and what secret knowledge they had that I did not. A few years later, an old man on Halloween had my friend and I recite the pledge before he gave us candy. It was a trick that we could do, and it was meaningless to us.

Physical education teacher and basketball coach Aaron Mueller sees both sides of the conflict on students’ right to stand or sit for the pledge.

“I believe that students have the right to exercise that freedom of expression,” Mueller said. “Many in our country have been treated unjustly for a long time. This is one form of protesting against these injustices.”

Announcements in Parkway always include the Pledge of Allegiance, and has been a source of animosity to students who have less faith in the country, but are pressured, or even guilted, into complying. I have had to sit through lectures from teachers in the past on how people have died for the flag, and how the least I could do is stand, even though kneeling is often a symbol of respect.

“There is no verbal pressure to do it, but I’ve certainly seen teachers and staff members who give me the side eye of ‘why aren’t you standing for the pledge?’” Sivabalakannan said. “As an immigrant, as a person of color, this country has discriminated against me and people of my kind so often. If the country is not treating me with respect, isn’t it enough for them to see what I’m trying to do by sitting for the pledge?”

Also, sitting and kneeling have rarely been an insult in the various cultures of the world. A tradition in Chinese New Year is to kētóu to the people you respect, such as parents and teachers, where you kneel and touch your head to the floor before them. People kneel when they pray, such as when Tim Tebow, an openly Christian player, prayed on the football field in 2011. Sitting and kneeling is not disrespectful.

While those who are currently in or have served in the military deserve respect, to me, the flag represents all Americans. If that is at the forefront of my mind, and if I believe that those less fortunate than I deserve more respect than what has been handed to them, then I have to trust that is enough reason to question the various symbols of America.

I believe that the flag, anthem, pledge, and people of America should represent all of its inhabitants, regardless of citizenship. A country is not a country without the people within it.

“I feel like the national anthem is to honor our veterans,” Robinson said. “Like my dad, he’s a veteran. If it’s the national anthem, I will always honor my father. [But if] it’s just the Pledge of Allegiance, they try to make it stand for freedom and everybody’s equal and it’s just not true. And this year with the Black Lives Matter protests, it’s just shown everybody’s true colors, and how people really act behind doors.”

My privilege has allowed me to ignore politics for much longer than it should have. In the aftermath of the murders of people such as George Floyd and Breonna Taylor, I have begun to stay more informed. I am not Black, and I have not experienced racism in the ways that many people have. However, I can use my privilege for good. I am still learning, and I worry that I am not saying the “right” thing. I am open to criticism and conversation, and the country and its symbols should be too.

The insurrection at the Capital should not have happened, and maybe I am naive for thinking that the polarization of politics can go away because of it. But the opposite of being naive is giving up. Pushing out other opinions, making generalizations, losing respect for yourself and others. Americans pride themselves in their ability to persevere, but that skill needs to be turned inwards.

I personally will be helping the school with morning announcements, and I will be saying the pledge, because I choose to believe that the flag represents all people, and is a map to where we need to go. Americans are proud of their bravery, and I think one of the bravest things to do is to recognize yourself as a problem, and to stand up for yourself. Stand, or sit, against America. It’s really for America. Talk about the problems we allow to happen, and fix it. The action of sitting or standing is only the first step to real action.

In what is often called the Black national anthem, “Lift Every Voice and Sing” by James Weldon Johnson, the song emphasizes the freedom of speech and the validity of each person. Victory is equality, and that can come with open ears and open hearts.

Sing a song full of the faith that the dark past has taught us,

Sing a song full of the hope that the present has brought us;

Facing the rising sun of our new day begun,

Let us march on ’til victory is won.