From quarantine to quarters

Boys basketball works through challenges of being quarantined 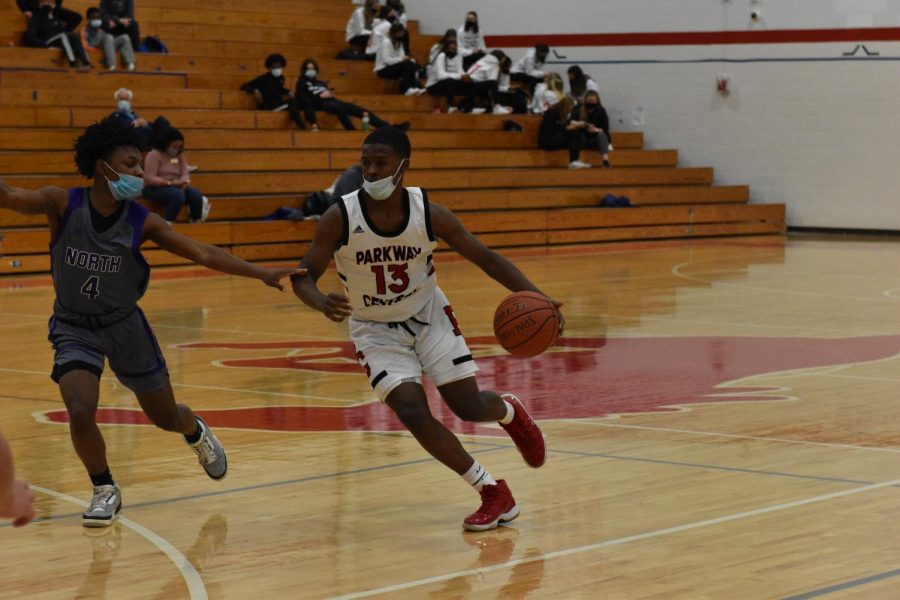 Junior Christian Pollard dribbles the basketball past a Parkway North player on Nov. 30.

Despite various setbacks this season the boys varsity basketball team remains hopeful for the end of their season. Between quarantine, key players facing injuries and only a few returning players this winter the team has encountered many hardships.

The team as a whole has faced two quarantines that lasted for two weeks each that have caused hurdles for the team. During their quarantine period the team was unable to practice or have games together and it is not easy to not practice for two weeks and come back.

“We have been working to establish an identity of hard work and togetherness. At times, this has been tough to do because we’ve missed out on so much practice time with quarantine and weather,” Mueller said. “But that Parkway Central basketball identity was established long before our players were born, and we have a responsibility to carry it on.”

Despite all of these setbacks, junior Andrew King has still managed to work on his goals this season.

“I’ve certainly been able to grow closer to some of my goals and work my way towards being an important part of the team,” junior Andrew King said.

The team as a whole has been working hard to overcome the various challenges they have faced along the way.

“This season I’m just proud of how we have battled every game and workout our best through the various challenges we have faced,” senior Jackson Shanker said.

For Shanker a highlight of the season so far was beating Parkway South two times.

“They are rivals with us so that was a fun experience,” Shanker said.

Joe Siervo, a junior player, has looked on the bright side of things.

“Personally I’m just glad we got to play and were able to have a full season even though there weren’t any fans. It was good for the seniors to actually get to have a basketball season,” Siervo said.

Mueller is fortunate that they were able to even have a season because in the fall he thought there was a possibility they wouldn’t have a season at all.

“I’ve enjoyed getting to go to practice everyday and be around the team. We’ve had some nice victories along the way too,” Mueller said. “Probably the three that stand out are Liberty, Summit, and Mehlville. In both the Summit and Mehlville games, we came from behind and really played together as a team.”

Senior Adam Kokal decided to return to basketball for this season since last year he made the decision to play club volleyball instead. Adam’s brother, Oliver is a freshman who made the varsity team this year, so the boys get the opportunity to play on the same team.

“Playing with Oliver and my friends is something I’ll miss and glad I chose to do,” Adam said.

Oliver and Siervo are leading the boys team in scoring. Oliver is currently the top scorer for the Colts with 158 points.

“Oliver has continued to improve and become more comfortable and aggressive throughout the year. He is going to have a great career here,” head coach Aaron Mueller said.

With less than two weeks left of the season the team’s goal is to continue to improve and compete and try to finish the season on a high note.

“Our schedule is tough, but we want to be playing our best basketball going into the district tournament, which starts on Saturday Feb. 27,” Mueller said.

The boys are hopeful for the remainder of the season.

“I’m hoping the rest of the season will be as much fun as the first half. We’ve got a couple more weeks left, but finishing out the season strong and healthy would be great and just leaving it all out on the court so there’s no regrets after the season’s over,” Adam said.