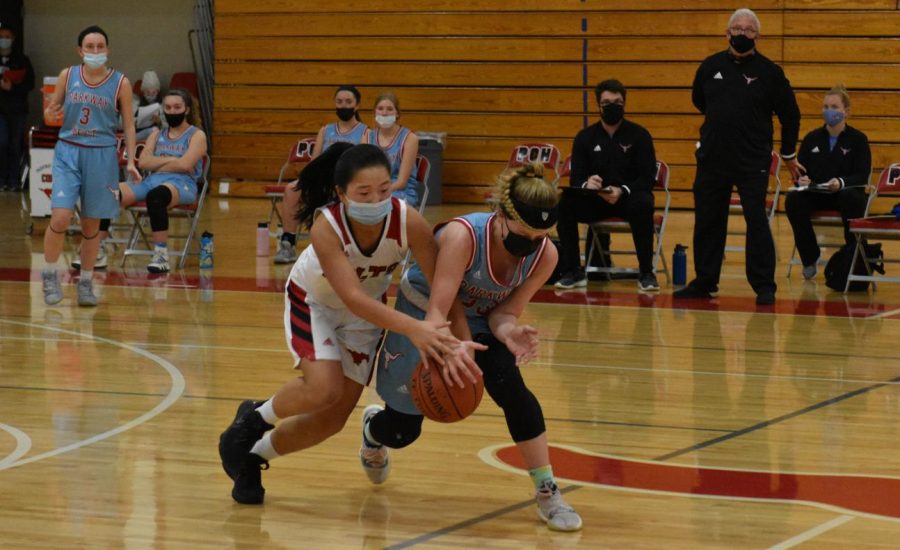 Sophomore Maggie Roberts goes to steal the ball at the game against Parkway West on Jan. 11.

This year the girls varsity basketball team only returned one starter from last year’s team and is a young team.

This year the team had several players come out for this season that did not play last year including Mercedes Browder, Jadyn Wallis, Jessica Parsons and Hannah Sanfard. Both the returning players and new players have all brought something to the team.

“I honestly could name every player on the roster and what they individually bring to the team to make us better,” Guilfoyle said.

Having a team with a lot of girls who had never played together is not easy, but the girls worked on building this up.

“One major challenge we’ve had this year is communicating. With almost an entire new team there’s a lot of rebuilding and getting to know how eachother play,” Meier said.

This is Wallace’s first year playing basketball since 7th grade.

“Everyone was so inclusive. I’ve made so many friends between all the grades and it’s fun getting to play with everyone,” Wallace said.

For Wallace since she has not played for a while she had a big learning curve, but was thankful the coaches took her under their wings and helped her improve.

“With a little bit of help I was able to sharpen some of my previous skills and learn so many new ones and new plays all in a short period of time,” Wallace said.

Head coach Brian Guilgoyle identified Roberts as one of his more consistent players.

Roberts leads the team in scoring with a 11.7 points per game average, rebounding, assists, steals and throw throw percentage. Roberts has a 76% accuracy rate for her free throws.

“Grace Meier and Maggie Huff are also huge leaders on the team and are the captains,” Guilfoyle said.

For Meier her highlight of the season is the ability to be able to go out and play everyday, practices and games even with the current situation. Her goal for the season was to maintain 33% three point shooting and Meier is currently successful with this goal.

This season the biggest thing the girls have worked on as a team is their consistency and chemistry.

“Confidence is a big part of high school sports and you have to believe in each other to be successful,” Guilfoyle said. “We have a very young team so they are learning lots of new concepts.  One player can’t make the team successful.  It takes the entire team buying into playing hard and giving everything they have for eachother every night.  If you care about each other you will help your teammates on and off the court.  We want these relationships to last a lifetime.”

COVID-19 has brought challenges for many sports teams. The girls faced one two week quarantine, but they did not let this stop them from working on their skills.

“Luckily because of Zoom we were able to continue practicing our skills from home and learning as you go,” Wallace said.

Guilfoyle hopes that for the remainder of the season the team continues to bond together and shows confidence in each other as they go into district action.

“I want players to give complete effort every night and enjoy the remaining games,” Guilfoyle said.  “We were very fortunate to have a season and the kids really battled through adversity and became stronger.”