In preparation for the Academy Awards on April 25th, the Corral will be reviewing and ranking every Best Picture nomination 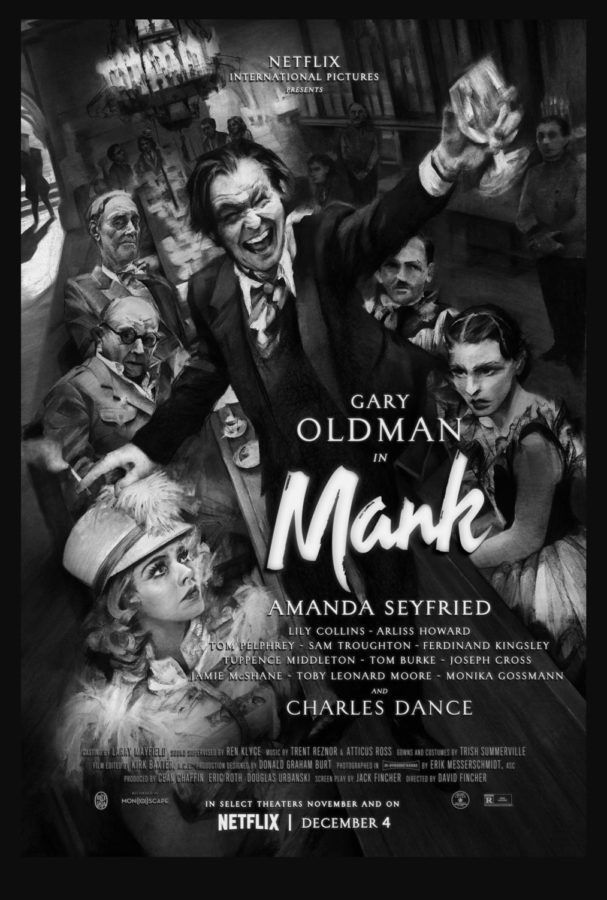 "Mank", directed by David Fincher, stars Gary Oldman as screenwriter Herman J. Mankiewicz, writer of the legendary film "Citizen Kane". The film is about Mankiewicz's experience in 1930's Hollywood, shown through flashbacks, as he writes "Citizen Kane" in 1940.

“Mank”, directed by David Fincher, stars Gary Oldman as screenwriter Herman J. Mankiewicz, writer of the legendary film “Citizen Kane”. The film is about Mankiewicz’s experience in 1930’s Hollywood, shown through flashbacks, as he writes “Citizen Kane” in 1940.

I was very excited to see this movie. David Fincher has directed some of my favorite movies, including “Se7en”, “Fight Club”, and “The Social Network”. Unfortunately, compared to his other films, “Mank” falls short.

There are some impressive aspects to this movie. In preparation for watching “Mank”, I watched “Citizen Kane”, and I am glad I did. “Mank” does a lot on the technical side that reminds me a lot of “Citizen Kane”. There are many shots that are obviously constructed in reference to those in “Citizen Kane”, which is very fun to watch. I think the editing style in general is great, with the many flashback scenes being introduced via typewriter. I also love how the actors voices sound similar in quality to the voices in Kane. This film does a great job at paying homage stylistically to the film this movie is about.

Unfortunately, my praise ends there. The biggest, most glaring flaw to this film is the story. Like “Citizen Kane”, this story is told non-linearly. The audience is shown Mank writing the screenplay, then flashbacks to his experience being around Hollywood in the 1930s. While in “Citizen Kane” the non-linear story telling added a lot to my experience, in “Mank” it only confuses me. I appreciate what the film is trying to do in showing how his experiences in Hollywood influenced his writing, but even after just watching Kane, I am disappointed in how unsatisfyingly these writing and flashback scenes are pieced together. I think a scholar of “Citizen Kane” might appreciate how subtle Fincher is in showing the connections between Mank’s experiences and his screenplay, but as an average movie watcher who wants to be entertained, it just didn’t do it for me at all.

The movie is so focused on showing all of these different characters and their motivations that it also forgets to make an emotional story. This is the first Best Picture nominee I have seen so far that makes me feel nothing emotionally. This movie puts all its eggs in one basket by assuming that the audience knows and cares about the general story behind Mank and his screenplay. Because I didn’t know anything about it, I was very uninvested in the story.

Before watching, I thought “Citizen Kane” would be a technically impressive but otherwise boring movie. I was completely proven wrong, and I love “Citizen Kane” much more than I thought I would. A movie which more accurately fills the “technically good but boring” description is “Mank”. There is a lot of great film-making here, but Fincher does not have much to work with. Even entertaining performances from Gary Oldman and Amanda Seyfried can’t save this film for me. Watching “Mank” just made me want to watch “Citizen Kane” again. If this movie sounds interesting to you, just watch “Citizen Kane”.