Science Olympiad's revival brings success in its first year back 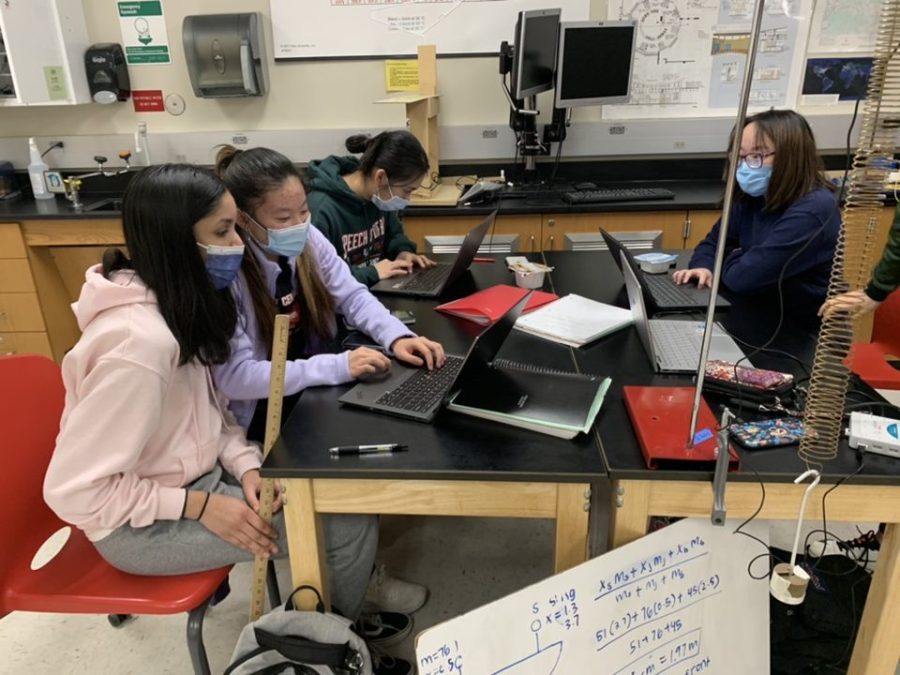 Combined with the variety of Speech and Debate and the individuality of an independent study, Science Olympiad has recently been revived with new energy. The only Parkway high school with a Science Olympiad team, nearly entirely new members after the club was put on pause during COVID have brought new life to this club. Cofounders Karen Lee (11) and Emily Wang (11) reanimated the club due to their prior positive experiences.

“We were in Science Olympiad freshman year because both of our brothers were in it,” Wang said. “They made us do it, but we really enjoyed it. This year, we started it because there’s this event we wanted to do called Write It, Do It that we wanted to do.”

There are over 20 events in various categories such as research, lab-based, construction, and more. These include Cell Biology, Trajectory, Rocks and Minerals, Code Busters, Chemistry Lab, and Anatomy and Physiology to name a few.

Science Olympiad events cover a wide variety of topics that may not be covered in the school curriculum, encouraging learning and problem solving.

“Whenever I explain what Science Olympiad is to people, I describe it as ‘track & field for science,’” sponsor Mollie Oakeley said. “I love that there are so many different events and the fact that students get to show off their skills in a competitive setting like that.”

This is Oakeley’s second year of teaching both in her career and at Central. On top of teaching Biology, Forensic Science, and Environmental Science, Oakeley organizes and coordinates all of the information and registration required for tournaments.

“I communicate with people at the regional and state levels in regard to upcoming tournaments,” Oakeley said. “I take care of team registration, I keep track of the tournament manuals and make sure we are following all of the guidelines, I sign up our competitors for their events and make sure that if they have multiple events, that their times don’t overlap.”

The team’s first tournament since pre-COVID was on Feb. 12 at Lindenwood University. Each school is placed in a district based on location, which determines the schools that they compete against. Sarah Joseph (12) and Fareeha Siddique (12) both started Science Olympiad in the current school year, partnered in Cell Biology and placed first, meaning that they will be able to move on to compete in state on April 9 in Springfield, MO.

“Placing in state was unexpected, but exciting nonetheless,” Joseph said. “We are both AP Biology students, so the Cell Biology event was pretty easy.”

“The tournament was a lot of fun,” Siddique said. “Me and my friends drove down there together and we had a great time cheering each other on for the events that we participated in. We also got food and were able to work on some homework during downtime. My actual event wasn’t that stressful since me and Sarah worked together by splitting up the pages and comparing answers during the time limit.”

Preparation for the tournament, especially for test-based events, does not have to be a time-consuming activity, especially with the option to go open-note. Meetings are few and far between, and each is no longer than 20 minutes.

“It’s a really fun time to try our best, so you don’t have to take it too seriously,” Lee said. “I just found it really fun to do experiments with friends and then figure out what we both didn’t know.”

Many students in Science Olympiad are motivated by an enduring interest in science.

“I love how science is straightforward, and how everything builds on top of each other , such as how physics explains chemistry and chemistry explains biology,” Joseph said. “I’ve always had a natural affinity towards anything STEM related, so that’s why pre-medicine is my future career track.”

“I’m not going into STEM; I’m going into business,” Wang said. “But I still really enjoy the Science Olympiad because there’s just so many topics.”

An enduring understanding and appreciation for science is what brings the club together.

“My favorite part of Science Olympiad is getting to be part of a team where we all support and cheer for each other,” Siddique said. “I think it’s so amazing that Science Olympiad gives us the opportunity to do something fun with all the science knowledge we learn in our classes.”